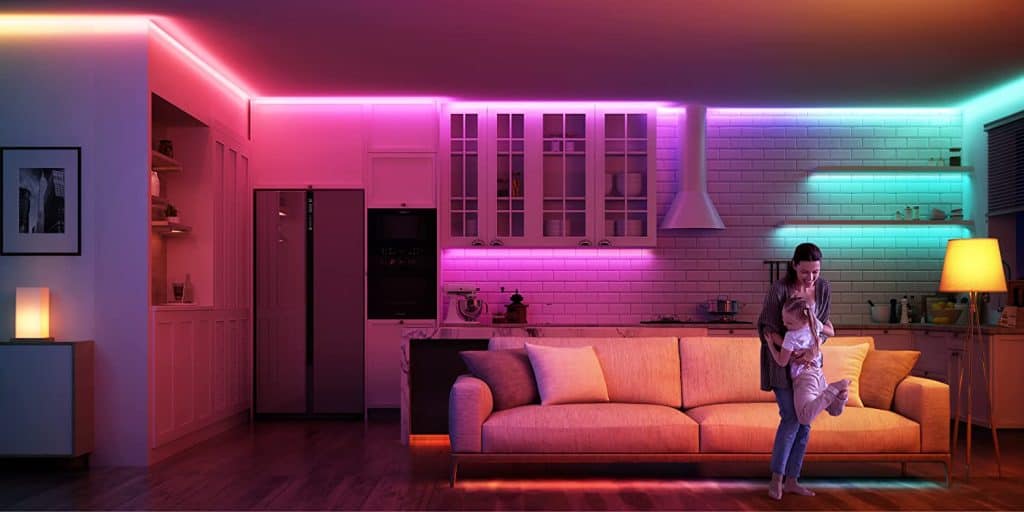 Behind the bed, on the background wall

When it comes to personalized LED light strip lighting, there are various methods. My initial thinking is to hang them up behind the headrest on the wall. The headrest-hidden refracted light provides the bed’s surface a three-dimensional appearance and gives the room a warm, romantic feel.

Just beneath the bed, install a circle of RGB LED strips without turning on the main illumination. If you’re lying down and using your phone to browse the internet, the light can make you fall asleep, which will prevent eye irritation. The light might also be enlightening if we have to get up in the middle of the night, but it won’t flash in our eyes and wake us up. On a couple’s bed, LED strip lighting underneath the mattress may also help to create a nice and romantic atmosphere.

RGBInstalling LED strip lights on the ceiling is another well-liked and smart idea. Ceiling lighting can be concealed so that the light source reflects off the ceiling in an unobtrusive manner, dividing the gloomy appearance that the low ceiling creates and adding to the bedroom’s depths.

In Front of the Television and Around The Furniture

Do you ever watch TV in bed? If so, you might place LED strip lights behind the screen to ensure that there is adequate light when you watch TV at night to prevent eye strain. Isn’t it a lot of fun?

LED strip lights can also be used to decorate the area surrounding the furniture. To provide lighting and an additional source of light for taking pictures if your bedroom has a dressing station, you should put the LED strips behind or next to the mirror.

Choosing the Best LED Strip Lighting for the Bedroom: Things to Think About

Basically, the color and décor of your home have a big impact on the hue of the LED light strip. Warm white and natural light are frequently used for interiors, and occasionally RGB light with a remote control is used to change the colors to generate a more beautiful effect. Actually, the main place where individuals unwind is in their bedrooms.

The bedroom’s lighting influences mood and sleep in addition to providing illumination. It is better to utilize minimal color temperature LED strip lights in the bedroom rather than extremely bright or showy ones. We could, for instance, use a yellow light source to produce a relaxing sleeping environment that offers people a sense of intimacy and vitality.

When it comes to using lights in the bedroom, convenience is essential. Typically, LED strip lighting comes with a wireless controller, and some smart LED strip lights let you use an app or voice commands to turn on and off the LED lights as well as change their colors and brightness. We are no longer in danger of waking up on the edge of the bed.

Overall, bedrooms ought to have less light than bathrooms and kitchens. When choosing LED strip lights for bedrooms, keep this in mind. We also need different levels of brightness depending on the time of day, which calls for the usage of a dimmer to control. Dimmable LED strip lighting can also aid in energy conservation.

Always think about installation and configuration when choosing light strips for a specific use. Some strips, like the DC LED Flex Strips, can be applied to a clean surface by simply removing the adhesive backing. It may be significantly more difficult to mount, trim, and wire strips together during other installations.

Contact us now and get the best LED lights for your project!